It’s officially Super Bowl week, so it’s time to get to know the people you’ll be watching during the game (or ignoring during breaks in the ads, depending on how much you care about football).

One of the most fascinating figures in the game is not a player, but L.A. Rams coach Sean McVay. The 33-year-old is literally half the age of his counterpart, Patriots coach Bill Belichick, and possesses infinitely more fashion sense and hair gel.

McVay has been hailed as an offensive genius who is apparently so smart he can remember every play he has ever called, but he apparently has a weakness: a tendency to wander aimlessly onto the field.

Enter Ted Rath. Rath is the Rams’ strength coach, but on game days he has one job: prevent McVay from running into players and refs. NFL Films recently released a highlight reel of Rath in action, and it’s pretty funny watching someone follow around a full-grown man as if he were a toddler at the mall:

Yes, Rath is McVay’s “Get Back Coach,” and he spends the entire game pulling, poking, prodding and pleading with McVay to notice the giant white stripe below his feet.

“There is an art to it,” Rath told NFL Films. “It is kind of like a dance. Maybe Tango?”

I think Ted Rath should just get a baby carrier for Sean McVay #MissionAccomplished pic.twitter.com/26I0eA2TAI

Twitter user @KyleRauch, meanwhile, joked that his friends have to do the same thing for him when they’re out drinking: 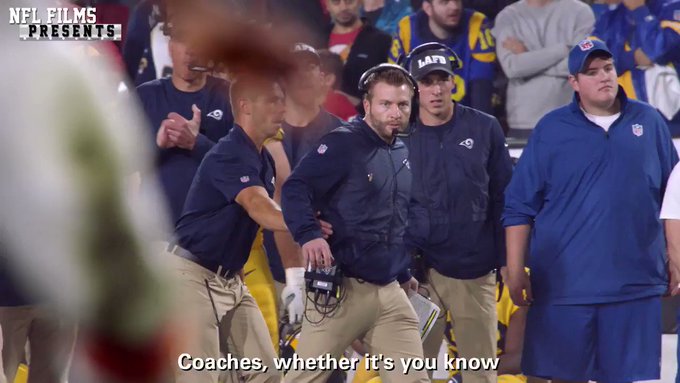 Of course, these coaches are nothing new to football. Every team employs someone to keep the sidelines in check to avoid penalties, but some of the more intense coaches get their own personal wranglers, like Ohio State’s Greg Schiano and Georgia’s Kirby Smart.

One coach even uses his 12-year-old son. The appropriately-named Adam Smotherman has risen to fame as the get-back guy for Clemson’s Brent Venables, partly because handling Venables is less like corralling a wayward toddler and more like trying to hold back an attack dog, one that sometimes turns on his handler:

And before you decide this whole thing is ridiculous, the Pittsburgh Steelers’ Mike Tomlin definitely could have used a get back guy in 2013.

So this Sunday, in between the ads and the action on the field, keep an eye peeled for Rath, who will be getting his chance to shine on the biggest stage by keeping his boss from wandering onto it.

Cruise line workers reveal one of the biggest disadvantages of...