First lady Melania Trump sparked backlash on Thursday by wearing a jacket that says “I really don’t care, do u?” on the way to her surprise visit to Texas to visit immigrant children.

The $39 jacket, made by Zara for its spring/summer 2016 collection, is a distinct departure for the first lady, who tends to favor more-expensive high-fashion looks. But it’s very much in line with past incidents in which Trump’s fashion has come under fire.

“It’s a jacket,” her spokeswoman, Stephanie Grisham, said in a statement to Business Insider. “There was no hidden message. After today’s important visit to Texas, I hope the media isn’t going to choose to focus on her wardrobe. (Much like her high heels last year).”

Grisham was referring to the backlash to the first lady’s wearing sky-high stilettos as she headed to Texas after Hurricane Harvey in August. In October, Trump sported stilettos once again when boarding a plane heading to Puerto Rico, where Hurricane Maria had recently hit.

In both cases, she changed into a new outfit upon arrival, with stylish, form-fitting jeans and a baseball cap. She did the same on Thursday, ditching the green Zara jacket for a neutral buttoned-down look when she arrived at the Upbring New Hope Children’s Center in McAllen, Texas. 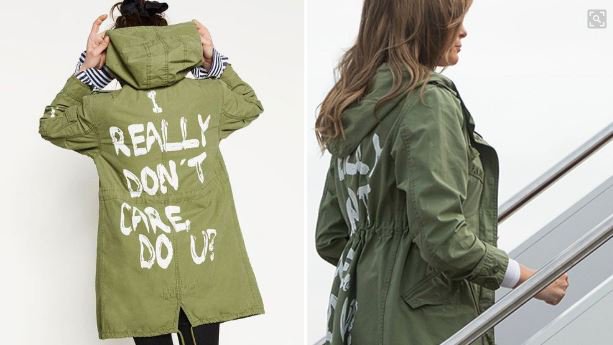 While there may not be a “hidden message” in her jacket, Trump knew that wearing the outfit would prompt a reaction. The first lady most likely fully understands the spotlight she is in, with coverage of her disappearance from the public eye earlier this year and of her fashion choices.

These incidents have been fodder for the right to use as “evidence” that the media is biased against Trump. When Trump was mocked online for her stilettos, right-leaning sites cited the backlash as proof that the “liberal elite” and the media are out of touch.

“I like to dream that Melania chooses her ensembles just to piss off liberals,” said one tweet following the stiletto backlash.

Trump makes fashion choices deliberately and strategically. She is aware of the message she is sending, which is typically one of aspirational luxury.

Left-leaning criticism isn’t necessarily a concern for the first lady. Instead, Trump’s mission has been to demonstrate – through her fashion or her brief disappearance – that she refuses to do what is expected of her. Then when people criticize her fashion choices, the first lady is able to respond through a representative by slamming the media.

Fashion is political for the first lady. While she may not troll the media in the same way her husband does, she knows how to dress to get a reaction.

Malaysia’s former prime minster Najib Razak explains why he had...

Sink your fangs into the science of snake venom