Finding a doppelganger of a celebrity is not an easy task but still, it can be done. However, what will be your expression if we tell you that there are animals too who look like celebrities and have a striking resemblance?

It is a common notion that the high-profile political leaders of every country, such as President, Prime Minister, etc., have duplicates or doppelgangers for security purposes. Nevertheless, there are many celebrities also who have their doppelgangers and sometimes they have so much of resemblance that it’s really difficult to recognize the original one.

But today we are going to talk about a strange concept and it will definitely amaze you. It is being said that the pets such as dogs, cats, etc. develop facial features similar to their owner but you will be surprised to see the photos of some animals who look exactly like the celebrities whom they have never met.

Well, here is a list of 20 such celebrities and their look-alike animals:

Samuel is a very famous Hollywood actor and producer. This high profile celebrity has worked in many movies and entertained us for quite a long time now. Finding a doppelganger of such famous actor is not a big thing but finding a resemblance between him and a dog is definitely a big thing.

Doesn’t it appear that anger in the personality of Jackson reflects in the eyes of a dog as well? Look how they are red with fury! Not only eyes but their noses and lips also have almost similar shapes, making the dog a look-alike of Jackson! 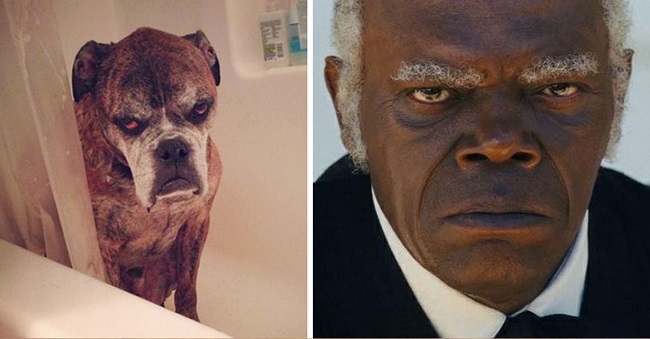 2 William H. Macy and the dog with same features

William Hall Macy Jr. is an American actor; he has worked in many small and independent movies and is also seen in a television series. People are comparing his photo with a dog’s photo as there is a striking resemblance between both. Those wide eyes and lips do match with each other and that’s why William H. Macy deserves to be in this list. 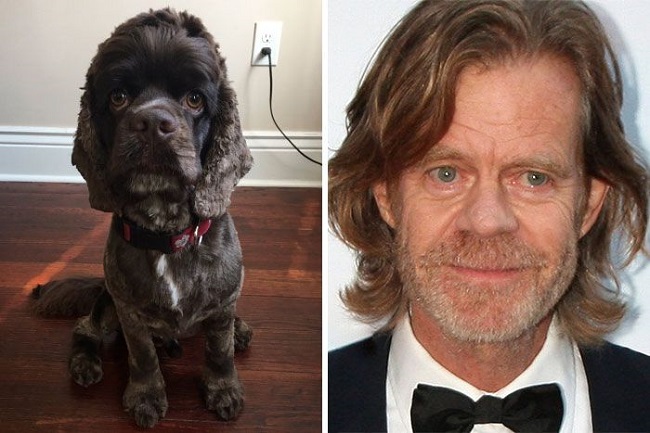 Miley Ray Cyrus is an actress, singer and a songwriter and she has a huge fan following as once she was also a teen idol.

Here we can see that a giraffe is giving competition to Miley Cyrus with its twirling tongue. With the cute horns, it’s trying to look as hot as Miley and we just can’t get over their resemblance. 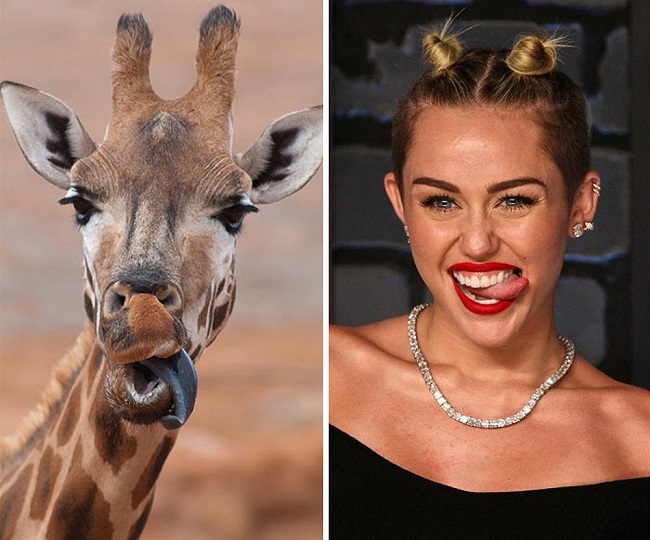 4 Donald Trump’s hairstyle and this caterpillar

Donald John Trump, the current President of the US, will go down as a pretty controversial figure in the history of American politics. Before Donald came to politics, he was a businessman and a TV personality.

It’s quite amusing as well as surprising to note that this caterpillar looks just like USA President Donald Trump’s hair.

Have a look and tell us what you think about it. 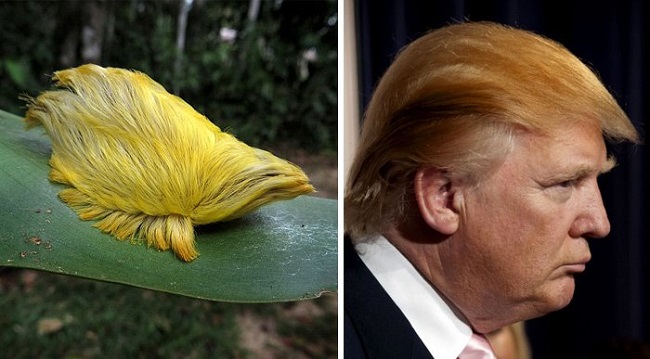 5 Vladimir Putin and this dog

Vladimir Putin, the Russian president, is considered to be one of the most powerful persons in the world and he seems to be a man of action and fewer words. His calm composure and sharp features make him look different from others but there is one living being who looks a lot like him.

OMG look how the dog’s eyes, nose and mouth bear striking resemblance to those of Vladamir Putin! Even Putin will be shocked to see this, won’t he? 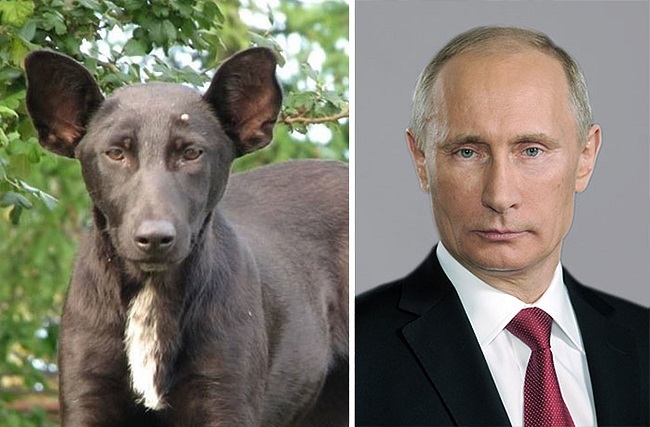 6 Richard Branson, the business magnate, and this dog

Richard Branson whose complete name is Sir Richard Charles Nicholas Branson is an English business tycoon, investor, and a philanthropist. He is the founder of Virgin group under which 400 companies are managed.

A photo of a dog is going viral because it resembles a lot with Richard. That’s remarkable! Apart from eyes, hair and facial features, the dog’s skin tone and texture also match with those of Richard Branson. 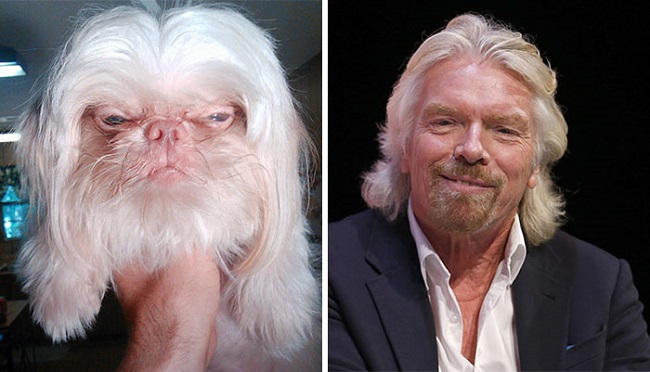 Adolf Hitler is known as one of the most notorious dictators that the world has ever seen. He is the one who is held responsible for starting the World War II and killing nearly 11 million people which also includes the mass murder of six million Jews.

This cat looks a lot like the German dictator and similarity lies in the not-so-happy eyes, nose and the little mustache which make even the cat look like Hitler. Poor rats will get a heart-attack just with a sight of this cat’s frightening looks. 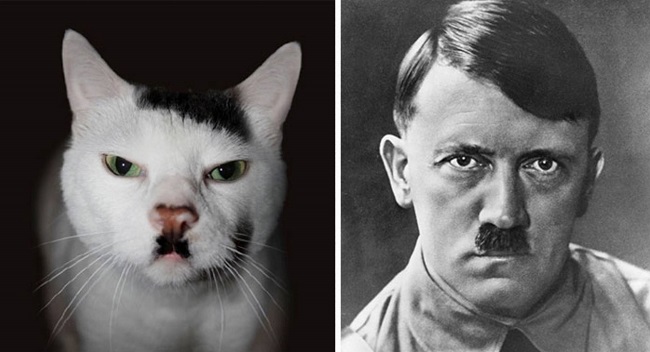 8 Snoop Dogg and the smiling dog

His real name is Calvin Cordozar Broadus Jr. and he is a singer, rapper, record producer, songwriter, television celeb and an actor.

A dog’s photo is going viral as it is being compared to Snoop Dogg! Talking about the similarities, that pretty smile, half-shut eyes and nasal features of the dog look like those of Snoop Dogg. Moreover, the yellow popsicle on the left photo is adding to the similarity, making it a perfect one to be classified under this category. 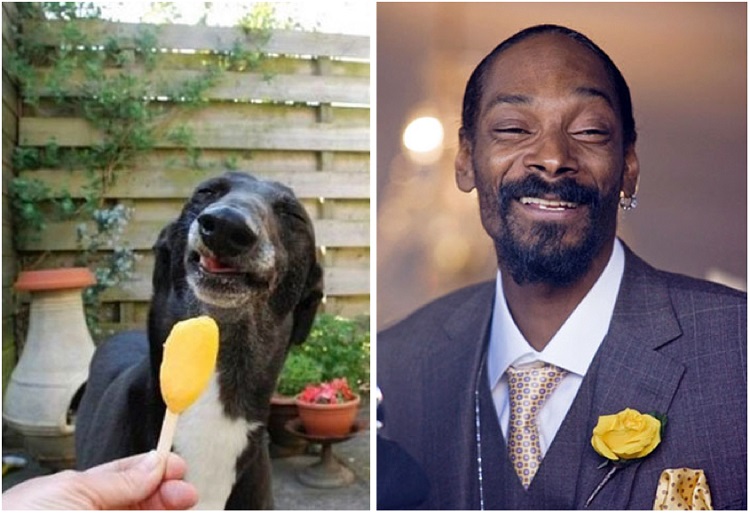 9 McKayla Maroney and the bunny

McKayla is an American artistic gymnast who has won many medals for the country in various competitions. However, when she won the Silver medal in the 2012 Olympics she gave a “not impressed” expression which went viral on the internet.

In this photo, the bunny is giving the same “not impressed” expression and it’s so cute, isn’t? 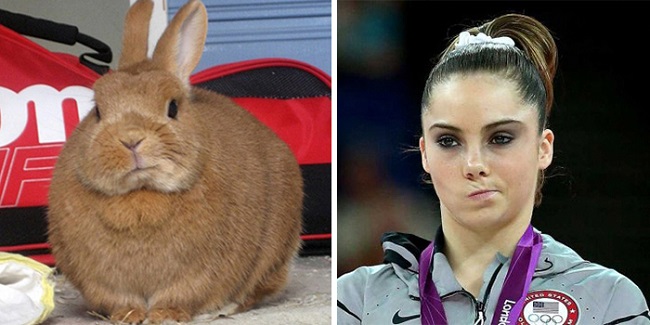 George Edward Clinton is an American singer, writer, bandleader and also one of the foremost trendsetters of the funk music. Just like his style of singing, his dressing sense and hairstyle are also funky and in this photo, even a Saturniidae Moth’s caterpillar is looking similar to him. 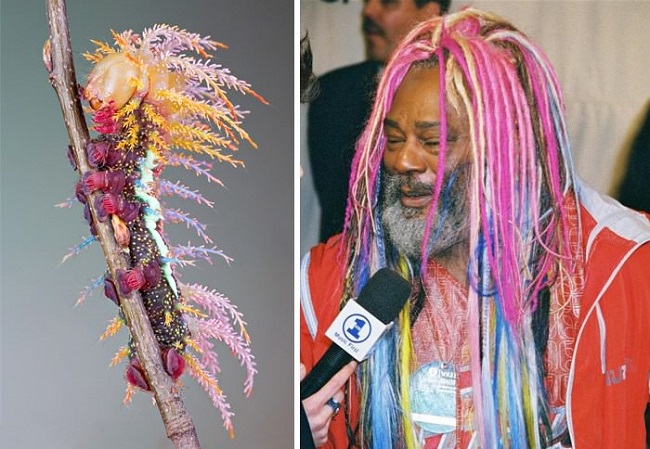 Rowan Atkinson, the English actor and comedian who is very famous for playing the character of Mr. Beans, has a great talent for saying everything through his facial expressions. He is considered as one of the best comedians of the world and here is an owl that resembles Rowan’s looks to a great extent. 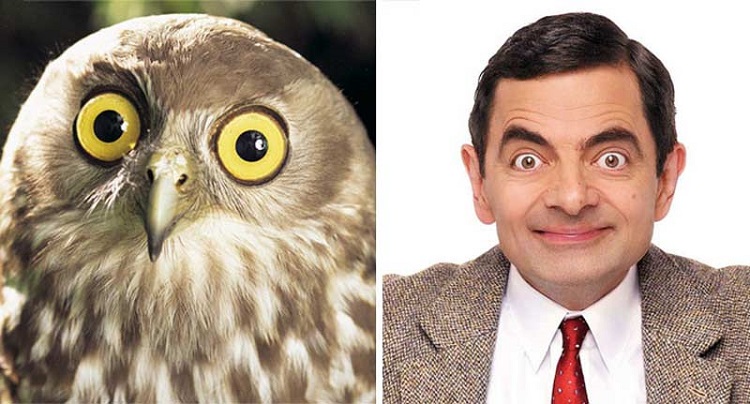 12 Eugene Levy and the cat

Eugene is a Canadian actor, comedian, writer, director, musician and producer but most of us remember him for his performances in the eight movies of American Pie series.

A cat is looking very similar to Eugene and the main attraction is the heavy eyebrows that cat and Eugene have.

Harrison Ford is one of the greatest actors of Hollywood and he is pretty famous all over the globe for the wonderful work that he has done in the movies.

However, this dog has copied Harrison’s expression to the perfection and we are awestruck by this similarity between the human and the animal. 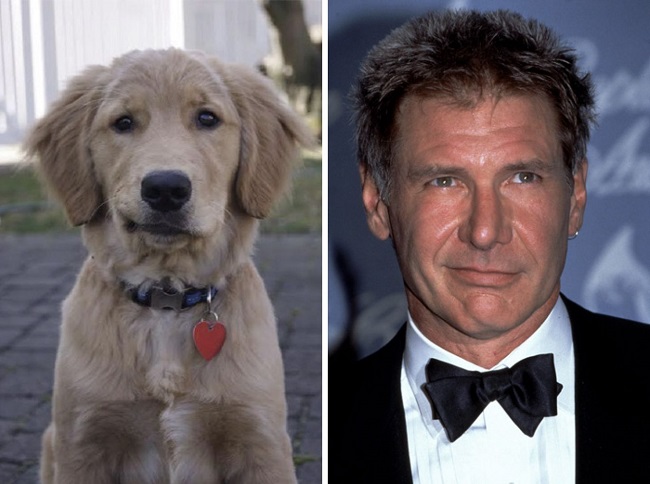 14 Albert Einstein in a playful mood and cat copying him

This is a rare playful photo of Albert Einstein, the German physicist, and it was clicked on the occasion of his 72nd birthday.

The cat can also be seen imitating Albert’s playfulness by sticking its tongue out and we have to admit that she is looking cute but not more than the scientist! 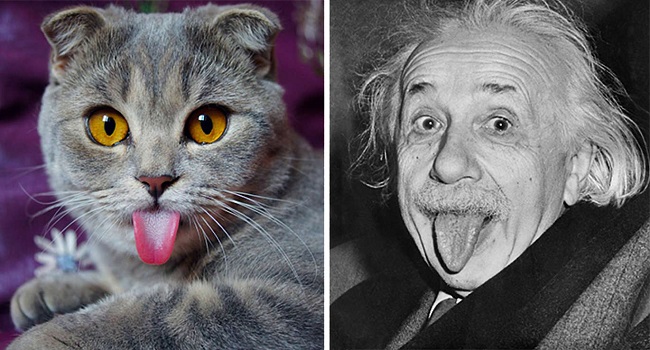 15 Innocence of Adrien and monkey is very similar

Adrien Brody is a famous American actor and producer. He became the youngest actor to win the Academy Award when he won it for Best actor at the age of 29. The Internet is going crazy over his comparison with a lesula monkey.

That innocent pair of eyes, nasal structure and even lip area of the lesula monkey look amazingly similar to the facial features of Adrien Brody. Even the color of their eyes is pretty much same. 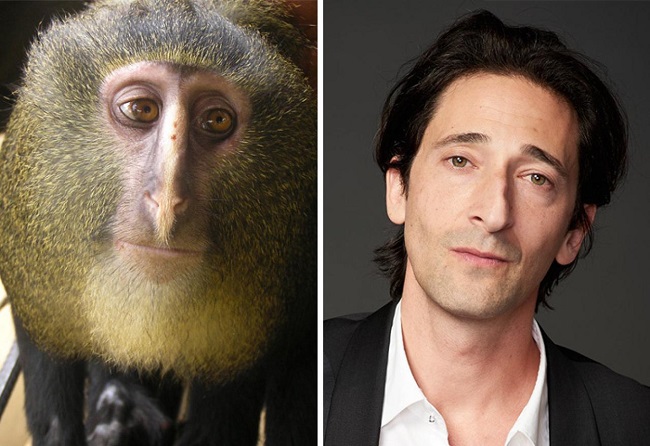 16 Salvador Dali and Hamilton the cat

Salvador Domingo Felipe Jacinto Dalí I Domènech, professionally known as Salvador Dali, was a Spanish surrealist. He was known for making striking and weird images in his surrealist work and his mustache also symbolizes his love for surrealism.

However, Hamilton, the cat is naturally embodied with an appearance which matches to Salvador’s appearance whether its mustache or eyes. 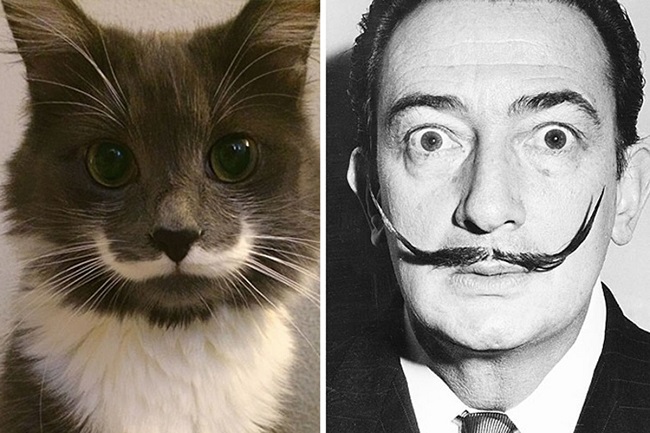 17 Madonna and the stylish frog

Madonna who is also known as the “Queen of the Pop” is a singer, songwriter, actress, and businesswoman. She has a huge fan following and there are many who are mad for her songs and style. However, there is one living being who has perfectly copied the swag of Madonna and that is a frog.

Look at the unbelievably same sitting pose of the frog and Madonna! In fact, the position of their hands is also much similar and the frog seems to have as much swag as the singer herself has! 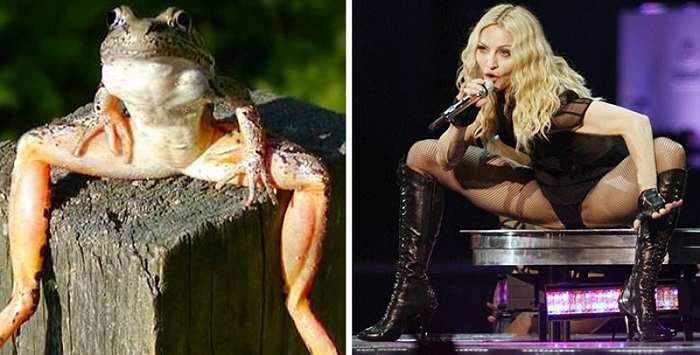 18 Ron Perlman and this dog

Ronald Francis Perlman who is more popular as Ron Perlman is an American actor and voice actor. He has won the Golden Globe award for a role in the television series Beauty and the Beast. He has also played the character of comic book character Hellboy in both the movies of the series.

From hair to eye and nose to lips, this dog bears an uncanny resemblance with Ron Perlman. 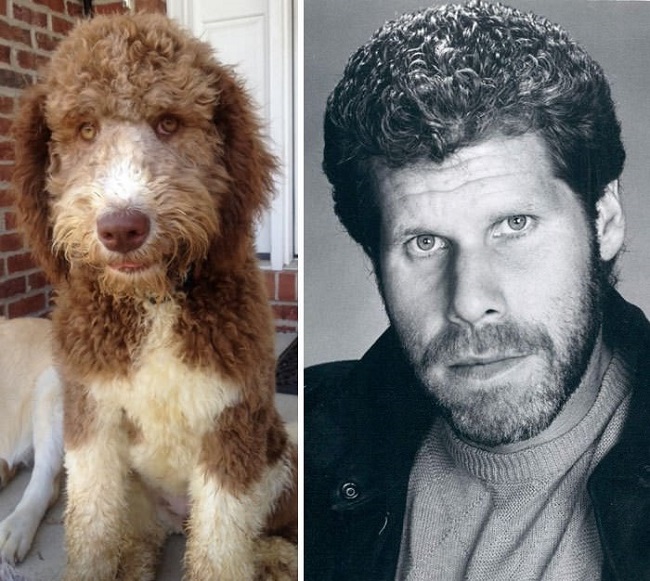 19 Dalai Lama and the happy llama

Dalai Lamas are the spiritual leaders of Tibetan people and they are usually calm, composed, knowledgeable and happy individuals. 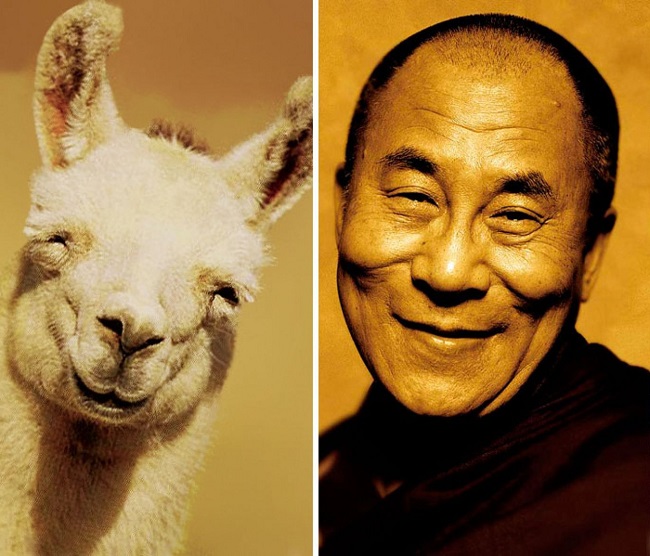 20 Peyton Manning and the sad dog

Peyton Williams Manning is the former American football quarterback who has played in the National Football League for 18 seasons, 14 seasons for Indianapolis Colts and last four for Denver Broncos. His “not-so-happy” expression is copied exactly by this cute little dog and we are just floored, aren’t you? 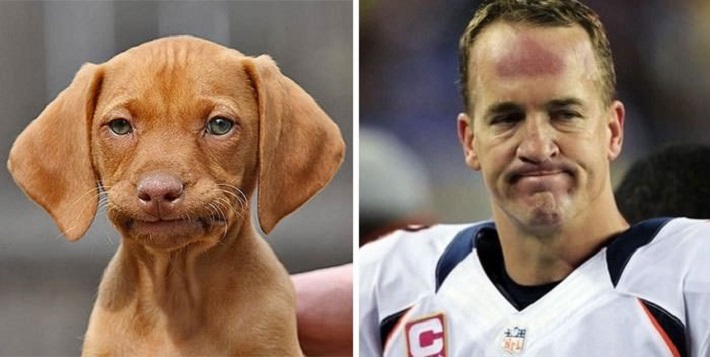 15 Laundry Hacks Will Make Your Clothes Bright and Fresh...