A powerful winter storm that has killed at least nine people and left hundreds of thousands without power has moved on from the Midwest and is pulverizing the mid-Atlantic and East Coast, dumping inches of snow and prompting governors in the region to declare states of emergency.

On Sunday, a winter storm, which began Friday in the midwest, slammed North Carolina, Virginia, Maryland, and Washington D.C., covering the nation’s capital with between four and seven inches of snow and forcing the three main airports in the region to cancel hundreds of flights. 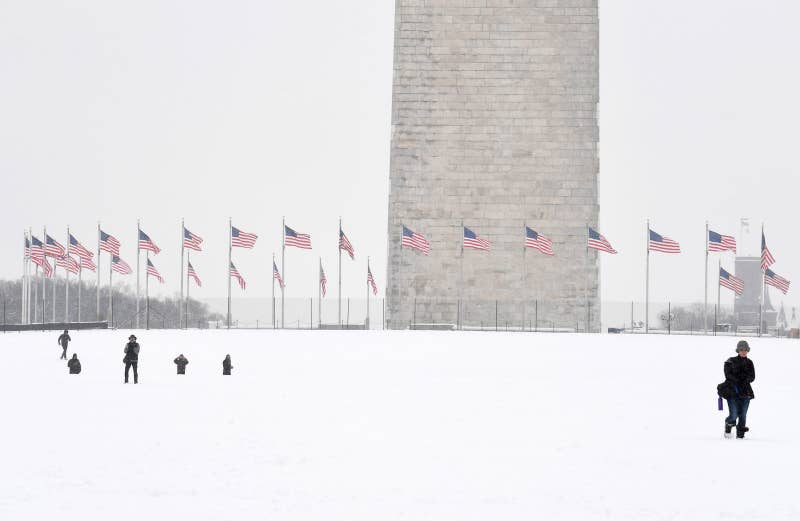 More than 180,000 people in North Carolina and Virginia lost electricity on Sunday afternoon, prompting governors of both states to declare states of emergency as the storm dumped dangerous snow and ice over the region. As of Sunday evening, Virginia state troopers said they responded to about 324 crashes on the slick, icy highways, which killed three people and stranded nearly 200 vehicles. Officials have urged drivers to stay off the roads until later Monday.

Around 4:30 am, units responded to a sand-truck that had overturned on North Kings Highway. Fortunately there were no injuries. The roads are still treacherous at this time – and will be for a while. Please stay off the roads if possible. #FCFRD #snow #fairfaxcounty pic.twitter.com/NBfeBUq6RV

According to the National Weather Service, nearly a half-inch of ice blanketed parts of North Carolina, knocking over trees and power lines.

“Though the worst of the storm is over, conditions are still hazardous in areas that saw snow and ice,” North Carolina Governor Roy Cooper said in a statement.

Most of the major school districts across the area have cancelled Monday classes.

Over the weekend, the storm also snarled traffic in Missouri and Illinois, stranding hundreds of drivers for hours and causing a rash of deadly crashes. In Missouri, ice, sleet, and slush resulted in 800 accidents, authorities said, killing at least four people and injuring 57 others.

Officials in Illinois described a crash along the interstates, with cars trapped in ditches and on medians and ramps. On Saturday, State Police Trooper Christopher Lambert was on his way home when he stopped to help a three-car crash in the suburbs of Chicago when another vehicle hit him, killing the 34-year-old.

“Trooper Lambert was a great trooper and was respected by those within and from outside the ISP, this is a tremendous loss which could have been prevented and should have never happened,” ISP Director Leo P. Schmitz wrote on Facebook, mourning the loss of the five-year veteran. “Trooper Lambert deliberately placed his vehicle in a position to protect the lives of the victims of the previous crash, and took on the danger himself. He will be remembered for his dedication to the Illinois State Police and for giving the ultimate sacrifice to protect and serve the citizens of Illinois.” 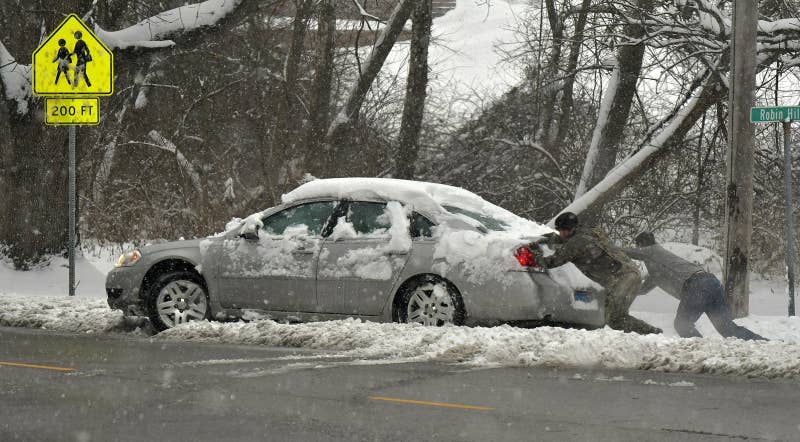 Michael Fuehne, left, and David Fellner Jr., both of Belleville, strain as they push the car of Billy Brownlee out of a pile of snow after Brownlee went sideways while making a turn in Belleville, Ill., on Saturday, Jan. 12, 2019. / Tim Vizer / AP

The storm also crippled power across the area, leaving more than 45,000 people in Missouri and about 24,000 others in Kansas in the dark.

Meteorologists said the storm should died down by early Monday morning, but not before blanketing a large swath of the eastern US in several inches of havoc-wreaking snow.

Shar Pei The Rarest Dogs In The World, How Awesome...